Signoria Square in the heart of Florence is one of the most famous squares in Italy. It is located halfway between Piazza Duomo and the Arno River and is built in a large L shape. The square contains some of the city’s most important buildings, including Palazzo Vecchio and the Uffizi Gallery. Beyond that, the place is a popular meeting point for both tourists and residents and often hosts important cultural events.

A little about the history of the place

Signoria Square is the main square of Florence and served as the political center of the city in the Middle Ages. It was built in the middle of the 13th century, after a great battle in which the leader Guelphs defeated the Ghibellines and won in return the rule over the region.

The name of the square came from the name of the palace that stands in it – Vecchio Palace since its original name was the Signoria Palace. After its establishment, over the years prominent cultural buildings were built in it and some of the most famous Italian sculptures in the world were placed in the square.

Besides the impressive architectural beauty of the square, Signoria Square is known for the fires that took place there, somewhere in the 15th century. The event, known as The Bonfire of the Vanities, took place in 1497.

Crowds of fans of the radical Dominican leader friar Savonarola gathered there and set fire to thousands of items: books, paintings, musical instruments, and more, which were considered impure and sinful to the Christian religion. A year later, under the direction of the Pope at the time.

The same ruler was sentenced to a particular educational punishment – death in a flame of fire. Today you can see on the floor of the square a memorial dedicated to the event of the execution, which took place in May 1498.

The most famous statue in the square is a replica of none other than David, the legendary sculptor of the master Michelangelo. He stands as the gatekeeper of Palazzo Vecchio.

In addition, a statue in the form of the gods Perseus and Medusa, designed by the artist Cellini, stands out. In the center of the square stands the water fountain of the sea god Neptune, designed by Ammanati and giving the place a spectacular sight, especially at night.

The interior space of the building is magnificent and beautifully decorated in an artistic way, designed by the well-known artist Vasari. A long corridor that crosses the building served as a connecting road to Palazzo Pitti, which was intended to be an escape route for the local aristocratic families, especially the Medici family, without having to pass through the crowd of commoners outside.

In addition, inside the palace building, there is an important cultural focus – the historical museum, which describes the story of the building and the transformation of Florence into an artistic Renaissance powerhouse.

The gallery displays well-known and important Italian works of art, for example, the famous painting “Birth of Venus” by the painter Botticelli, in addition to works by great names such as Leonardo da Vinci, Michelangelo, Titian, and Raphael.

Signoria Square is a very lively place, which serves as a major tourist destination in the city. During all hours of the day, you will see groups of tourists wandering around and cell phones being pulled out for selfies against the spectacular view.

In addition to this, there are many entertainment places around – various shops, excellent pizzerias, prestigious bars, restaurants, and local cafes. This is the most recommended place in the city to sit for a cocktail or an espresso.

The most favorite and well-known places are Cafe Rivoire and the prestigious Gucci Garden restaurant. In addition, events open to the general public such as music concerts, festivals, and political rallies are often held in the square. 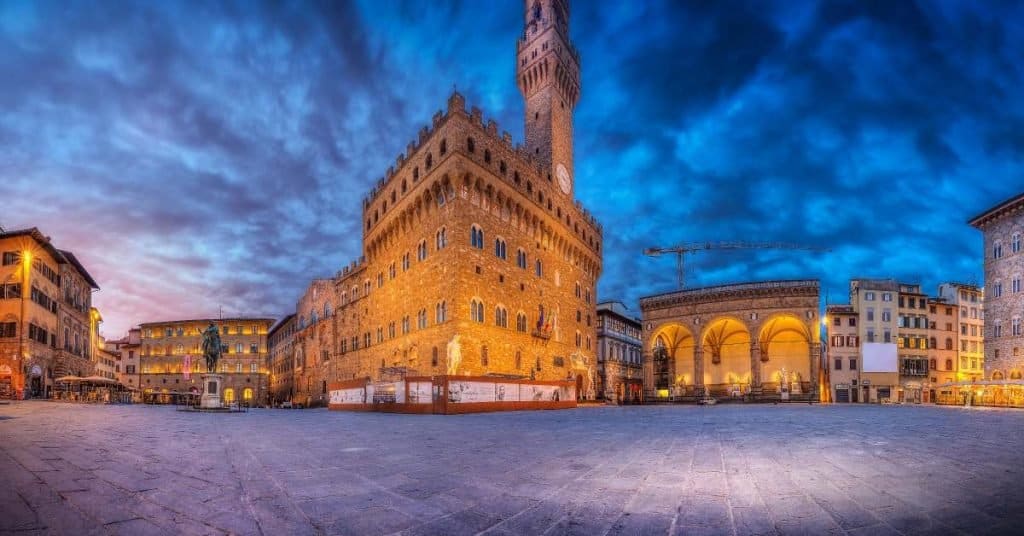