The old bridge of Florence

Ponte Vecchio is the old bridge of Florence. This is one of the oldest city symbols and has kept its shape since the Middle Ages. It was built in 1345 and made of stone and wood. Since then, it has undergone many changes, wars, and natural disasters, as well as innovations and renovations that have brought it to what it is today.

A little about the history of the place – the bridge is a source of local and even national pride, it served as a historical witness to all the events of the region for many years. The Italians are so proud of it, that in 1938 Mussolini invited Hitler to the reopening ceremony of the bridge after a renovation. Legend has it that after the Nazi oppressor saw the miracle with his own eyes, he decided to spare it in the terrible airstrikes he launched a few years later on the area. This could explain the fact that in the many bombings that the area has suffered, the ancient bridge is the only bridge that was not damaged at all.

What is there today – the ancient bridge is built straight, with high arches throughout, as a direct continuation of the road on both sides. On top of the bridge, on both sides, shops face the inner side of the bridge, creating a sort of small internal market. Each store has a window with wooden doors and a backspace that serves as a warehouse for goods. Connected to the upper part of the bridge is the Vasari Corridor, the strategic passage established in the 16th century at the Medici family’s request to allow a quick and safe passage to the private hermitage.

In the past, the inner market of the bridge contained simple food stalls: vegetables, fruits, meat, and fresh fish. The vendors used to throw the leftovers into the river and thus polluting it. For the sake of the environment and to increase the prestige of the place, it was decided to vacate these stalls and replace them with gold, jewelry, and diamond shops, which would be more in line with the elegant renaissance character of the area.

For hundreds of years, the old bridge was known as a favorite site for selling luxury items and was frequented by gold, silver, and diamond merchants. Even today, the situation is not much different, with the addition of other stores that meet the high standard, such as stores for quality leather products. The area around the bridge, via de’ Guicciardini, via Por Santa Maria, Lungarno degli Archibusieri, and Borgo San Jacopo, is also full of good shopping options, restaurants, and points of interest that will provide you with a pleasant stroll in the area.

If you have time to continue wandering, you should also go to the area under the bridge. There you can see the historical site Società Canottieri Firenze, enjoy various sports activities in the waters of the river, wander the streets that line both banks, and enjoy a good Italian meal and a refreshing cocktail alongside the unique pastoral view.

How to get there – by bus – lines C3 and D to Ponte Vecchio station or line C2 to Orsanmichele station. 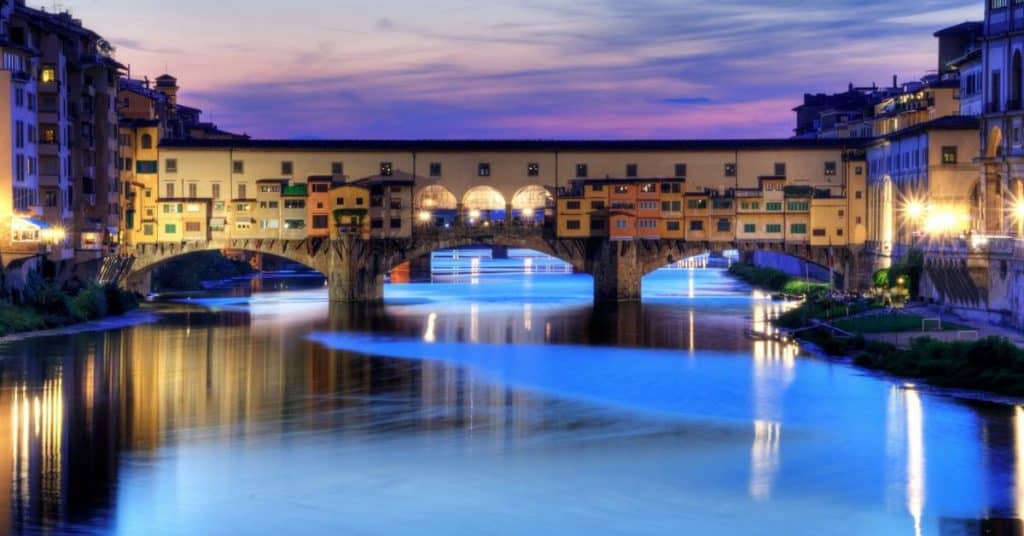