Milan is a city of culture and is, therefore, a perfect travel destination for those who want to enjoy an urban vacation full of attractions such as museums, heritage, and historical sites, musical performances, art exhibitions, galleries, and more. As such, it is also a great destination to visit in any season of the year, because most of these places are indoor and therefore suitable for visiting even during rainy and cold days.

If you are one of those history buffs with an affinity for religious sites, the Church of St. Ambrogio in Milan is one of the places you don’t want to miss. It is an ancient church dating back to the 4th century AD when it was built by Ambrosius, the ruler of Milan who later gained the status of a saint. It is also the burial place of many saints, making it one of the most central and important sites in Milan.

The church of St. Ambrogio functions to this day by its original appearance and is used as a place of religious worship to which many come and where official events and weddings are held. As such, it may be crowded with visitors, especially during the summer months which are the peak tourist season, and throughout the year every Sunday, during mass ceremonies.

In addition to its religious role, one of the things that make it a popular spot among tourists visiting Milan is the white marble column that stands near it, in which two holes can be seen. According to local folklore, these holes were created by the devil when he tried to seduce Ambrosius – when he failed, he hit the pillar with his horns, and these left holes in the pillar and earned him the nickname “Satan’s Pillar”.

Historically, the church is evidence of a conflict between two concepts related to Christianity (Arianism versus Nicene Christianity – which Ambrosius supported). As part of Ambrosius’ efforts to make Italy pro-Roman, he built some magnificent churches which he made sure to enrich with symbols and decorations that support his religious view. The Church of St. Ambrogio is one of them.

The building standing on the spot today is not the original building – over the years it has undergone several maintenance and renovation works, including partial reconstructions, while the building you can tour is the result of a rebuilding of the church during the 12th century in Romanesque style. Even after this construction, the building underwent further renovations, including in the 50s of the last century when the basilica was bombed by the Allies. 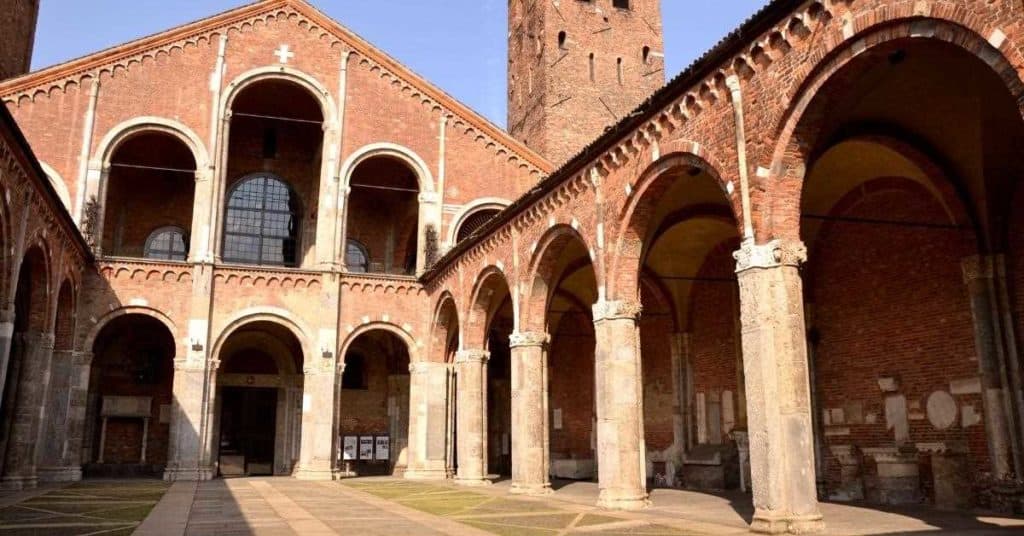