Italy is one of the most visited countries in Europe and as such it attracts tens of millions of tourists every year including quite a few tourists from the Holy Land. Among the favorite places of its visitors, a lively city such as the capital city of Rome, but in fact, Italy has many more magical places and pleasant corners to offer its vacationers.

One of these places is the special Naples, a city with a completely different atmosphere than the one familiar to those who have only visited Rome (respect is in its place) and if you have not yet visited this part of the land of the boot – you are likely to fall in love.

If you consider yourself a history buff and want to visit an ancient Roman city that will allow you to go back in time and glimpse the rich past of the Gulf of Naples, Ercolono is definitely a must-stop. Due to its attractive location right on the seashore, during the visit to the ruins of the city, you can enjoy a spectacular and diverse view of the beautiful bay, the Vesuvius volcano, and the streams flowing nearby.

The volcano near the city is the one that made it a famous place when in 79 AD it erupted and hot surges of lava flowed down it and together with a cloud of volcanic ash that followed they covered the city which was located on a hill at its foot. This natural activity, which lasted 24 hours, led to the burial of the city under a layer of about twenty meters of volcanic material and in 1997 the place was declared a world heritage site by UNESCO.

According to mythology, the founder of the ancient city was Hercules, the son of the Greek god Zeus and the mortal daughter Alcmene, and the city was also named after him. Apart from this belief, there is not much information about the history of the city except that it was under Roman control from 300 BC and its economy was mainly based on fishing, agriculture, and various crafts (mainly art).

Little by little, the prosperous city became a kit town for the nobility of the area and local artists and they built magnificent buildings there that were used as summer homes over the years extensive renovation works were carried out and public buildings and religious institutions were added to it, including residential buildings, an aqueduct, baths, fountains and more. These were decorated with various decorations, wall paintings, and spectacular design elements in the spirit of that time.

After the eruption of the volcano and for over 1500 years, no attempts were made to uncover the ruins of the city, which had been under the volcanic material that had hardened above them for all those years. In fact, the discovery of the first remains of the city happened by chance during the digging of a well at the beginning of the 18th century AD and later that century they began archaeological excavations in order to uncover more remains.

During these works, the truth was revealed about the magnitude of the disaster that befell the city during the eruption of the volcano, because until now it was believed that the residents of the city managed to escape before the city was covered in fiery lava and they were saved. During the excavations in the area, over two hundred skeletons were discovered in the boathouses near the shore, which apparently belong to the local residents who thought that if they tried to go towards the sea they could be saved. 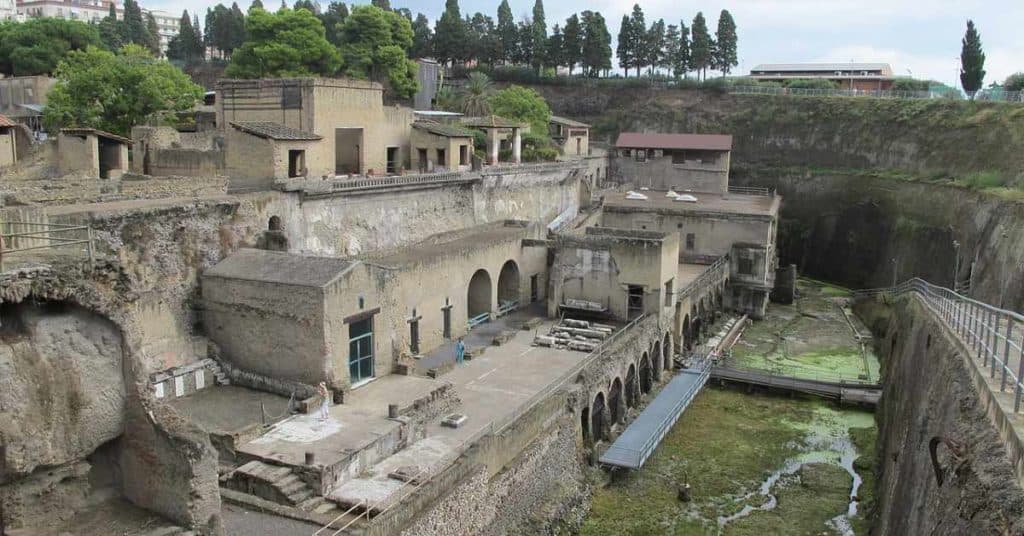