Naples’ Grand Piazza is the beating heart of the city and a popular point of interest in its historic center. A trip to Naples is incomplete if you haven’t visited the square at least once.

The open and spacious area of ​​the square is elegantly and beautifully designed, befitting a classic Italian square. With many sitting areas, ancient and impressive buildings, and branches of picturesque and narrow streets.

During the daytime, the square is lively and crowded with people. You will see many tourists and locals who come to the place to meet, travel, and soak up some sun. At selected times throughout the year, the square hosts various music shows, official events, and festive festivals.

Plebiscite Square got its name due to a historic plebiscite held there in 1860 (the word Plebiscite means “referendum”). Before that founding event, it was called Largo del Palazzo (translated from Italian – Palace Square). In the same year, the residents of the place were asked to decide on the question of whether the two kingdoms that ruled the region at the time – the Bourbon kingdom and the Savoy kingdom – should be merged and turned into one united and large kingdom. The results of the referendum were positive and Italy was united to its current configuration.

Plebiscito Square is home to the city’s most important historical buildings, with the Royal Palace at the top. The most unusual and prominent structure in the square is undoubtedly the Basilica of San Francesco da Paola, built as an imitation of the famous Pantheon in Rome.

On both sides of the square, you can see two other palaces – Palazzo della Prefettura and Palazzo Salerno painted in pastel colors.

In the center of the square stand impressive bronze statues, one dedicated to the Spanish ruler Charles III and the other to Ferdinand I.

In case you got tired of wandering or became hungry, in the vicinity of the square you can find many restaurants, cafes, and bars, with a lot of fine food, kind locals, and live performances in the evenings. A particularly well-known cafe is the Gran Caffè Gambrinus, located between Piazza Flavskito and the old town of Naples. 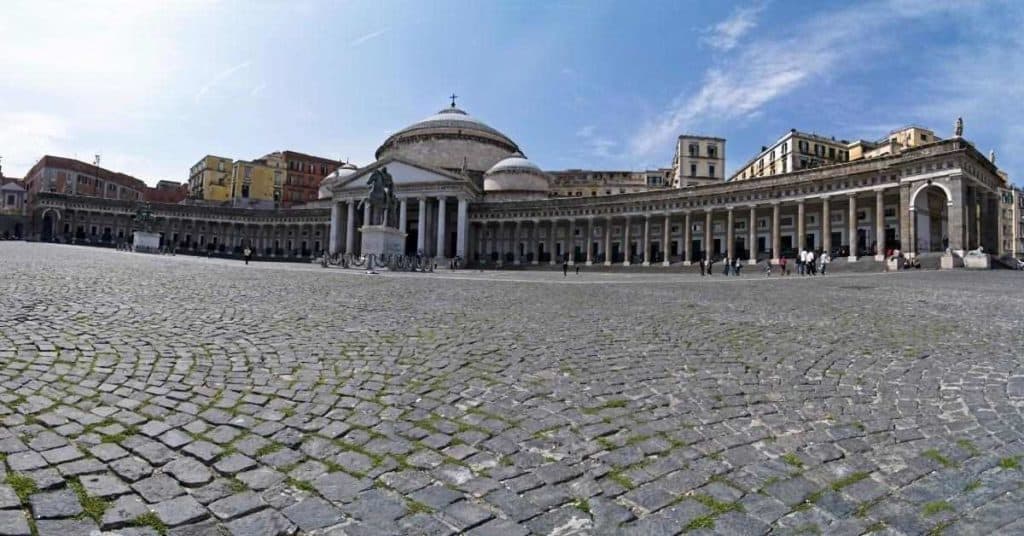