Every city in Italy must have a central square that is the center of the city’s social, cultural, and political life. Sorrento isn’t a very big resort town—it has less than 20,000 people—but it’s still an Italian city, and it has a square where all the interesting things happen and from which streets lead to attractions that make the city what it is.

In Sorrento, it is Piazza Tasso, which every tourist knows is where all trips, tours, and other activities in the city begin. Around the beautiful square are some of the city’s most popular restaurants, bars where both locals and tourists hang out, busy cafes, popular ice cream shops, and many shops.

You can also go to the square to enjoy baroque architecture, watch people going about their daily lives, and learn more about the history of the city.

What is Tasso, then? Whose name is on the square? So, Tasso is a man. To be more exact, he is a poet. Torquato Tso was a famous and well-known poet in Italy during the Middle Ages. You might ask, “Why in Sorento?” Well, Tasso was from the city and was one of the successful people who had grown up there. Tasso is also the person whose likeness is on the statue in the square. In the square, there is also a statue of San Antonio, who is the protector of the city and its safety.

The square wasn’t always in the middle of the city when it was built in 1886. In fact, the wall that surrounded Sorrento went right through the square. Since then, the city has grown, and the square is now the center of it all.

From the square, you can walk to some interesting streets or, more accurately, alleys that are small but full of life. For example, the main shopping street in the city, Via San Cesaro, has both small and large shops that you shouldn’t miss. Also near Piazza Tasso is the church of Santa Maria del Carmine, which is completely Baroque. The structure and design of the site are impressive and show that a lot of money and work went into it.

Spend at least two hours walking around the square and looking at the buildings and people. Just remember that the square is busy and full of people. And don’t forget to try the local ice cream or a cup of espresso, both of which are very good. A great way to take in the sights and sounds of Sorrento.

From anywhere in Sorrento, it is very easy to get to the square. There are bus stops and train stations close by. 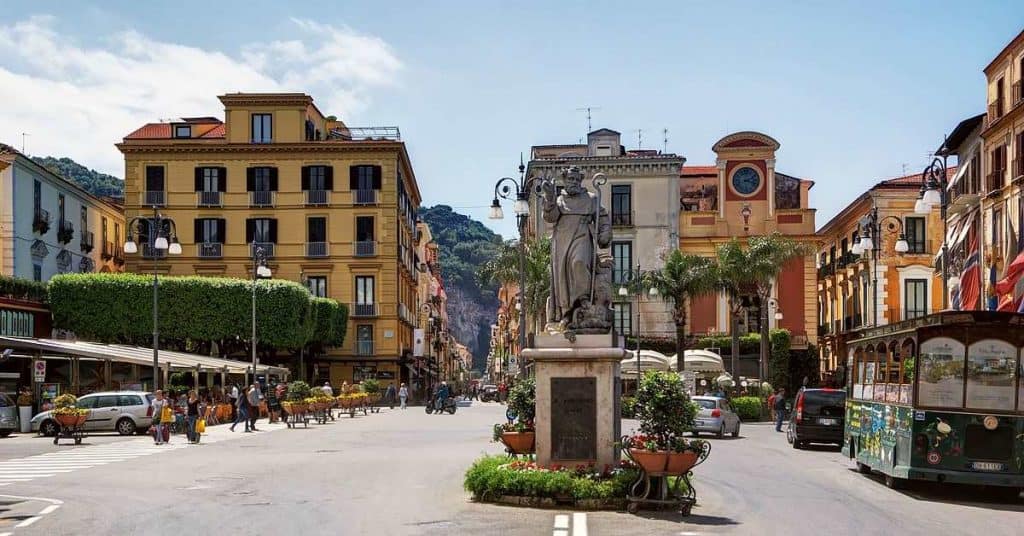