In the center of the city, near the Porta Susa train station, is the Torino Diplomatic Hotel. This is a 4-star hotel in a central location and close to tourist sites, which also provides its guests with quick access to all parts of the city, thanks to its proximity to main transportation arteries.

In addition to the Porta Susa train station, hotel guests can also easily reach the metro station at the 18th of December square, which ensures quick access to all areas of the city, and in particular to the university, the Olympic stadium and the new stadium of the city’s top soccer team – Juventus.

The rooms at the Diplomatic Hotel are air-conditioned and have a TV, mini-bar and free WIFI. All rooms are tiled with parquet floor. You can book a single room, a double room and large rooms for four guests. The upgraded rooms and suites also have coffee machines and some even have a jacuzzi.

Of course there are rooms suitable for families and for them the hotel also provides a babysitting service for a fee. Those who bring pets in addition to children, or instead of them, you should know that the hotel will let four-legged friends stay with you in the room at no extra charge.

The hotel itself is designed in a modern, interesting and inviting way. Despite the modern design, the hotel is located next to a passage that was established in the 19th century. The breakfast served at the hotel includes a buffet of popular breakfast foods alongside quite a few sweet options. Those who get up earlier can stop by the bar to drink coffee and eat a croissant. Dinner can also be eaten at the hotel, whose restaurant serves the best dishes of Italian cuisine and a nice selection of good local wine.

The location of the Diplomatic Hotel allows for easy walking in the city center, walking distance from the beautiful squares, for example Piazza Castello, Piazza Vittorio Veneto, Piazza San Carlo and more. The clubs and the hottest nightspots are also close by and allow you to experience up close the nightlife of Turin that comes to life in the dark in the Roman quarter. Of course, the famous cathedrals and the must-see museums (the Egyptian Museum, the Cinema Museum) are also nearby. The banks of the Po River, Dora Docks and the well-known Valentino Park are also not far away.

Thanks to the proximity to the Porte Susa train station, you can easily reach other parts of Italy as well as France. This is a main axis of high-speed trains that cross the countries, which can be especially useful for those traveling across the continent or in different parts of Italy. The transportation lines that will efficiently and easily take you from the hotel to the new Juventus stadium, make the Diplomatic Hotel a successful choice even for those who came to the city specifically to watch the games of the “Old Lady”, as the famous soccer team is called. It is also a good choice for those who want to go shopping in the city or to enjoy the best restaurants there.

The hotel offers shuttles from the airport and back, by prior arrangement. 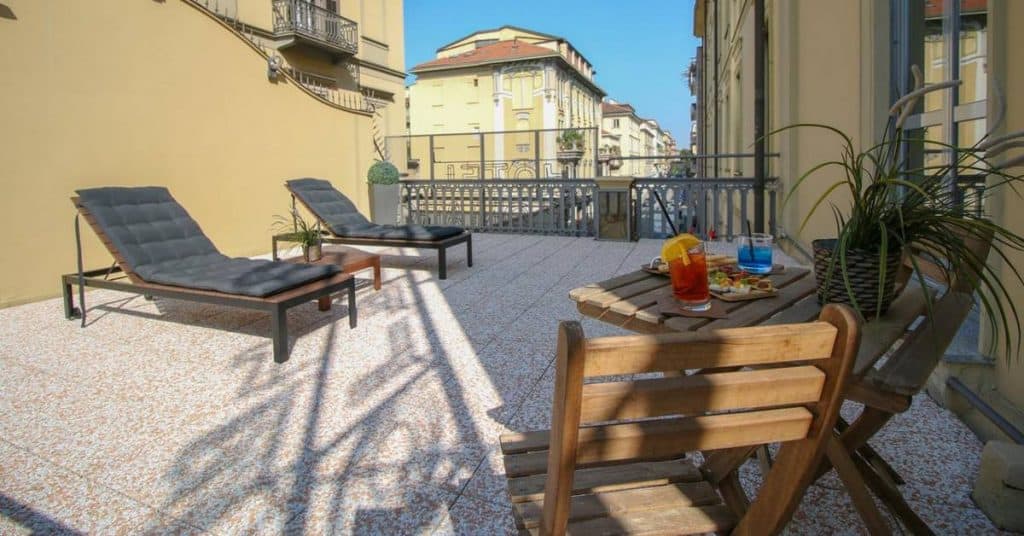 Number of rooms in the complex