Welcome to the most romantic and picturesque city in Italy! Venice is considered a sought-after and beloved destination that offers a wide range of possibilities: lively alleys, shops and stalls in abundance, night entertainment, festivals, mesmerizing views, excellent cuisine, culture, calm and many other options for every couple, family, group and individuals.

As the only canal city of its kind in the world, Venice provides a wide variety of ways of getting around and transportation as well as flights from most European capitals and countries of the world. Israelis enjoy 3 weekly flights from Tel Aviv to Venice throughout the year, when additional airlines join in the peak season (May to November) and expand the range of flights, as well as the price range. 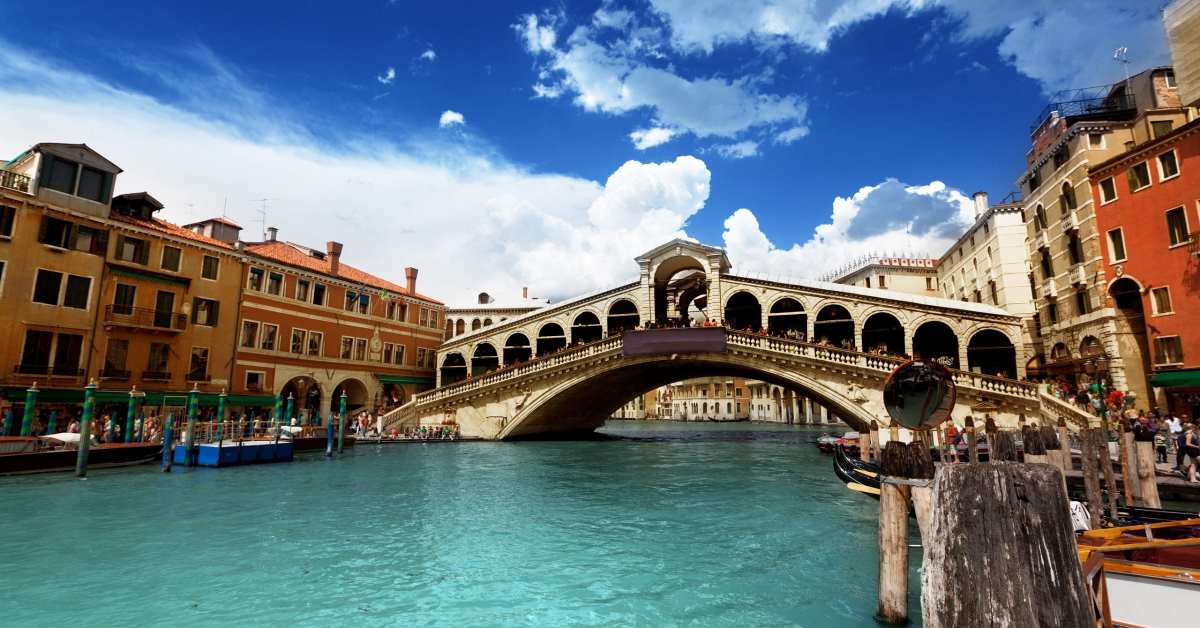 The city’s airport is Marco Polo (Aeroporto di Venezia-Tessera Marco Polo – VCE), named after the famous explorer who was born and lived in the city. The port is located in the nearby town of Tessera, which is located about 10 km from the center of Venice. It is considered the fifth largest in Italy (11.5 million passengers per year), while it includes international flights from all destinations in the world and many domestic flights from other cities such as Rome and Milan. There is another airport nearby – Treviso (Treviso Airport – TSF), which is about 30 km from Venice and is mainly characterized by low-cost flights. However, it is likely that most of the flight tickets from Israel to Venice, whether on a direct flight or via a stopover, will be intended for arrival via Marco Polo.

This is how you will get to Venice from the airport

The way to the city can be done in a variety of ways, all of them efficient and short (about 20 minutes drive). From the city you will have to use your feet or other transportation and you should choose the most suitable one based on the amount of luggage, since most areas of the city are not accessible by vehicles or taxis.

Vaporetto – Vaporetto is the direct way to the city, connecting by sea between the airport and the center of things. Vaporto is actually a ferry waiting for you at the exit of the airport (follow the signs at the exit and reach the Darsena platform, which is about seven minutes’ walk away) and costs between 15 and 27 euros, with the final price depending on the destination. Huaporto leaves every half hour and is active between 5 am and midnight.

Bus, line 5– will take you to the city center (Piazzale Roma) where most of the hotels are. The line is waiting for you right at the exit of the field and the travel time is about an hour between the various city stations in the city center, but from the city center you have to walk to your hotel. If your hotel is further away, you can catch one of the boats (water rituals) or use a private taxi which costs about 30-40 euros and is considered very expensive, but the most convenient if the hotel is far away and there are a lot of luggage. If you can be content with traveling by bus, you can purchase a ticket for this line at the ticket office at the exit of the field at a cost of 8 euros. Children up to the age of 6 travel for free.

Those walking to the hotel will be able to use paid porters from Roma Square to the hotel itself and save on dragging and carrying bags and luggage. The shuttle stations will be very easy for you to locate thanks to the large luggage carts located in the square. In addition, you will also find porters at the exit of the train station at the entrance to Venice (Santa Lucia Station), the Rialto Bridge (Ponte di Rialto)) and San Marco Square (Piazza San Marco).

Alilaguna water boat – the company operates three lines that are considered a very ideal way to get to the city. Go up to the first floor at the airport and continue to the left following the signs. The red line (R) is at your disposal during the peak season and passes through central stations. In other months of the year, you can use the blue line (B) and the orange line (A) that go through more stations. The cost is cheap – about 15 euros, but limited to one suitcase and one hand bag per passenger. If you want to upload additional luggage, you will have to pay more.

Car rental – Car rental in Venice is very popular especially for travelers who want to earn additional places outside of Venice itself. You will be asked to park the car in one of the parking lots outside the city, unless your hotel has private (and very expensive) parking and of course a road. The walk to the car rental areas at Marco Polo Airport takes about ten minutes, so it is strongly recommended to take a luggage cart.

Train (for those arriving in Venice from another city) – like the many domestic flights, the train is also considered fast, reliable and advanced and connects Venice to other major cities such as Rome, Milan and Verona. The main train station in Venice is Santa Lucia and from there there are several ways to continue, depending on the desired final destination.

In fact, throughout the year there are not a large number of flights from Tel Aviv to Venice (at least not regularly), so the arrival will usually include a route that includes a stopover in Rome (the fastest flight route) or other destinations depending on the company you are flying with, such as Vienna, Warsaw, Istanbul or Munich. The flights to Venice via Rome will fly for about three hours and then about another 50 minutes to Marco Polo. The longer the waiting time in Rome for the onward flight will be, the more attractive the price will be, of course.

Low cost flight to Venice – the most economical holiday

The low-cost revolution changed the face of the aviation world when the underlying principle was that passengers want to fly more and are willing to compromise on the conditions on the flight in order to pay less for that. Many companies began to cut back wherever possible in order to lower the prices: canceling meals and serving drinks, giving up the option of choosing a seat and flying with hand luggage only. And for proof, if until a few years ago you had to pay $730-550 (!) for a flight to Venice during the season, today, thanks to the low-cost companies, you can find a wide variety of seasonal flights at a price that does not exceed $500. These flights include an intermediate stop at another destination that includes between two and 10 hours of waiting (sometimes even more).

As you get closer to the winter season, the prices of the low-cost companies drop below 200 dollars, with the end of January being the cheapest date, with flights costing less than 150 dollars. EasyJet is usually the most affordable and you can find flights through them even for less than $100!

In February, the special mask festival takes place in Venice, and if you’re already in the area, you probably don’t want to miss it (and it’s definitely an extraordinary experience that shouldn’t be missed). The flight ticket during this period will cost an average of 220 dollars. If you decide to fly when it gets warmer, from March to the end of June, the prices will still be at a comfortable rate of about 300 dollars on average.

The best months to visit the magical city are May-June and September-October. It is recommended to avoid arriving in July-August for two reasons: also due to the overcrowding in the city which does not sit well with the (very) harsh humidity and heat and the fact that most of the shops and restaurants in the city are not air-conditioned, and also due to the unusual congestion recorded every mid-August, due to the existence of “Maria Day” which marks her ascension of the Holy Mary to Heaven and it is customary to hold a kind of additional “mini mask festival”.

Direct flights to Venice, without intermediate stops and without “cuts” in service to the passenger, are operated by El Al at prices starting at $250 per person. About 2-3 El Al flights take off to Venice every week, usually early in the morning so that the arrival at the field is usually around 09:00. Take-offs to Israel are usually made in the late morning hours, so the landing is around noon.

Connection to Venice via Rome: is this a better route?

Although it is possible to extend the trip by another day and spend 10-12 hours in another European capital, it is precisely Rome that appears to be the most viable as a connection destination for those who wish to fly cheaply and arrive quickly. The flight to Rome is about three hours and fifty minutes long, with an additional flight of one hour from Rome to Venice. The Italian company Alitalia operates a very large set of flights from Israel to Rome and operates several flights every day, as well as a large number of flights between Rome and Venice. This way you can choose times and rates that are convenient for you, purchase an Economy Classic card that allows you to send one suitcase in the luggage compartment (up to 23 kg) and a small hand bag on the plane (up to 8 kg) or the Flex Economy card for those who wish to make changes to the flight reservation without Commissions. Alitalia’s conditions can be considered as “low cost with benefits” which also includes the flexibility regarding luggage but also comfortable seats, fine dining and express check-in positions for business class flights.

The airport – information, services and tips for passengers

Marco Polo is considered a comfortable and advanced airport that always makes sure to upgrade and improve for the benefit of passengers. The airport has free Wi-Fi, charging points for mobile devices, luggage storage (ideal for those who use the airport as a stopover to another destination), a modest selection of food stands and cafes, ATMs, full accessibility for strollers and the disabled (in case special assistance is needed, we have informed the airline in advance of this) And of course duty free which includes quite a number of shops, but offers a number of Italian and international brands. The terminal itself is divided into 3 floors in one building, where the first floor is for the incoming passenger hall, the second is the departures hall and reception desks and the third includes the airline offices and management offices.

The summer at the airport is busy and crowded and includes very long queues. The very fact that the field is not particularly large makes it difficult to stay in it during these months, so it is better that you arrive early in the check-in line to avoid delays. In addition, you should know that not all field workers (and in general, not all Italians) speak good English and this is another reason to be early so that you don’t “brag” in the field and have enough time to find the right places on your own.

If you arrive at the field late at night and outside of public transport operating hours, use the municipal shuttle service that collects from 11 different points throughout Venice. You should ask your hotel where the nearest station is located.