Verona is one of the most visited cities in Europe and is also considered a favorite destination for Israeli tourists. As such, it is visited by crowds of tourists every year, including quite a few families, couples, and groups from the Holy Land alongside tourists from all over the world.

Verona has plenty of sites and attractions for the whole family – fascinating museums, historical sites of global importance, urban parks, and excellent restaurants, but some would argue that even if you visit all of these, a vacation in Europe is not complete if you don’t also enjoy the shopping bay (you don’t have to dedicate a whole day to it, it’s also possible to short but productive).

If you also believe that an urban vacation is not considered without some shopping experience, then a visit to the prestigious designer avenue of Verona is a must for you. The prestigious boulevard is a large pedestrian street located in the historical heart of the city and connects the two most central sites in Verona, aka Market Square and Bara Square.

Historically, the outline of the pedestrian street follows ancient roads that were built on the site during the Middle Ages until the 14th century AD, and as evidence of this, there are remains of buildings from this period, although most of them were destroyed towards the end of the 14th century and replaced by fortifications designed to protect the city. Over the years, the street has undergone many changes, the latest of which is the marble paving that was added towards the end of the 20th century.

The shopping experience on this street is one of a kind and completely different from any central shopping street in Europe, even though for those who do not understand architecture or history, everything sometimes looks the same – in Via Mazzini, you will find alongside the prestigious designer stores also quite a few buildings of extremely important historical value, such as Ancient churches, old buildings, theaters and more.

A tip from us: shopping is undoubtedly an experience that some of us cannot give up, but it is important to remember that Italy is not considered cheap in this context. Top brands will indeed be cheaper compared to the prices in Israel (well, where isn’t it?) but these are still expensive prices by any standard, so if this is a major part of your vacation, it is better that you visit the place during the big sales month – January. It will be cold (very), but not (too) expensive.

An ancient square where meetings were held and trade took place. In the square, there are important buildings, historical monuments and more. 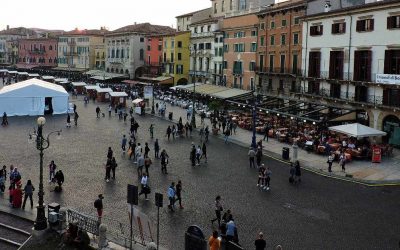 One of the main squares in Verona, certainly one of the most impressive. Serves as a starting point for a variety of attractions and popular sites in the city and as a place to rest and meet in between.